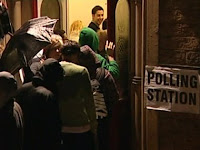 In response to the Secretary of State’s letter Brian dismisses the suggestion that three polls could be held on the same day as not only impractical but likely to lead to chaos, confusion and widespread frustration.

Alderman Wilson states that the Green Party position is:

• In practice two polls could be held on same day

• However these two polls must not be the Assembly and local government elections as:

a. These will both have long ballot papers with up to 20 candidates on each
b. Lead to confusion with some names on both ballot papers
c. Previous problems of holding two elections on same day Garrison (2001), Scotland 2007