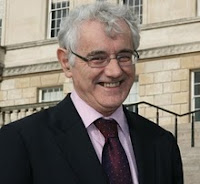 After more than 40 years in politics I have decided that I will not stand again for the Assembly. I feel it is time to step down and concentrate on other interests such as writing and the future development of North Down.

I have been involved mainly as a foot soldier in all the main political events of the past forty years from the civil rights movement to the Atkins Talks, the Good Friday Agreement and now the powersharing Assembly.

My first election was 45 years ago in 1965 when I recall canvassing for my friend David Bleakley the NILP MP for Victoria (later Minister for Community Relations) against Roy Bradford.

Since then I have been involved in dozens of elections from local council to European but I feel it is now time to wind down, bin my canvas leaflets and pursue some more creative interests.

In my 2007 election manifesto I highlighted my two main aims. The first was to help create a stable Executive based on powersharing something I have worked for for 40 years. Despite all its flaws I believe that this has been achieved and I look forward to the Assembly blossoming into a mature democracy in the years to come.

My second aim was to promote a “Greener Cleaner Healthier Future” for the people of Northern Ireland. While my contribution to a stable Executive may have been marginal I believe I had a role in persuading the Executive to adopt green policies, in particular the massive expansion in alternative energy and the adoption of the “Green New Deal” which has been the economic policy of the European Federation of Green Parties for many years.

I believe that the necessary structures have now been set up to achieve these 2 aims however progress will be slow and the next 4 years are likely to be frustrating in overcoming gridlock to become a truly democratic society.

Therefore I feel I should pursue my interests elsewhere. I intend to put my name forward for May’s local council elections and I would hope for the support of the people of Bangor West. I feel there are a lot of important issues facing local government at the present time including the RPA, the redevelopment of Queen’s Parade, and the transfer of planning to local government. I also feel I can play a role in monitoring the effectiveness of the services provided by North Down Borough Council.

I have found my term at the Assembly very interesting and I hope that I have been able to represent the people of North Down in an effective manner and raise green issues which had previously been ignored. I would like to thank the people of North Down for their support and I can assure you I will retain my constituency advice service until I stand down at the election.